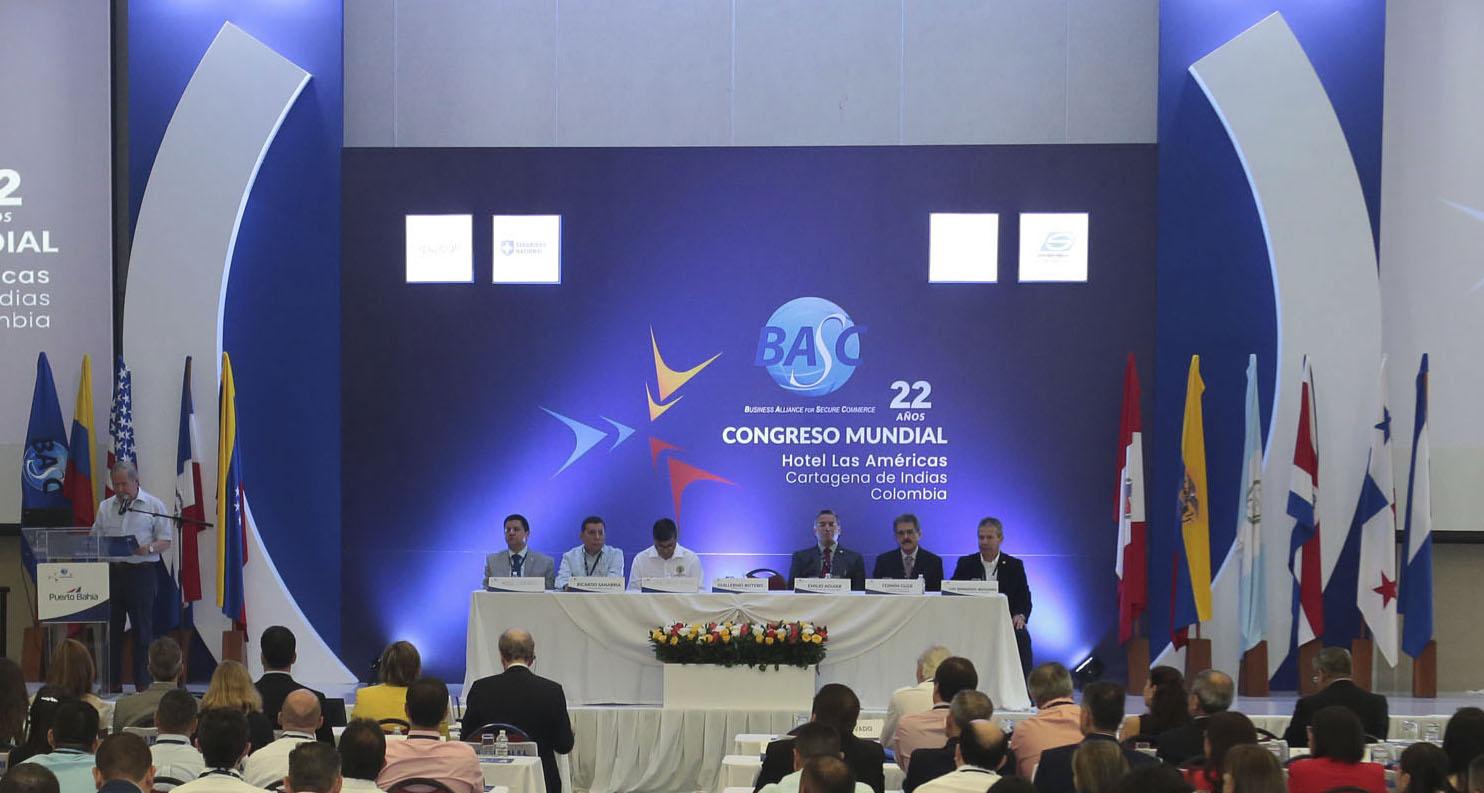 The World BASC Organization (WBO) and BASC Colombia National chapter, jointly held with great success, the BASC World Congress in Cartagena, Colombia, on September 19 and 20, in celebration of the 22nd anniversary of the creation of BASC. The theme of the Congress was: “Risk Management and Trust: The Road to Security and Competitiveness”. More than 540 public and private sector leaders, including government and enforcement authorities, gathered during the two days of the conference, to discuss and exchange views on how risk management is a shared responsibility that requires the integration of vision, commitment, and cooperation, along with shared resources, in order to both facilitate trade and protect the international supply chain.

The World BASC Congress featured presentations by different government and control authorities such as the World Customs Organization (WCO), U.S. Customs and Border Protection (CBP), Florida Customs Brokers and Forwarders Association (FCBF), PortMiami, Miami International Airport (MIA), the Ministry of Defense of Colombia, the Ministry of Trade, Industry and Tourism of Colombia, the National Tax and Customs Directorate of Colombia (DIAN), and senior representatives from Colombia’s government and military forces.

Mr. Robert Bonner, former U.S. Commissioner of Customs and Border Protection (CBP), who was Commissioner of Customs during the events of 9/11, was the keynote speaker in the congress. His speech stressed the import role that BASC played up to that time and how its success became a model for business-customs cooperation and helped strengthen cargo integrity throughout the supply chain for good shipped to the U.S as well as throughout the region. He was followed by Robert Perez, Deputy Commissioner of U.S. Customs and Border Protection, Washington, D.C., who congratulated BASC on its twenty second anniversary, inviting all member companies to continue promoting and expanding the culture of public-private cooperation in the international trade arena.

On the first day, the Congress addressed the role of public-private cooperation, with presentations by Eric Olafson, Director of Global Commerce and Business Development at the Port of Miami; Jimmy Nares, Head of Marketing of the Department of Aviation of Miami International Airport – MIA; and Juan Ricardo Noero, President of Puerto Bahia in Cartagena. They focused their discussion on the development and promotion of international trade while simultaneously maintaining a balance between security and trade facilitation in Latin America and the Caribbean. The discussion also emphasized the relationship between BASC and the Authorized Economic Operator (AEO) programs and the World Customs Organization´s SAFE Framework of Standards.

In addition, different business leaders and experts from different countries spoke and participated in various panels. The speakers included Lenny Feldman, Sandler, Travis and Rosenberg, Customs Law Attorney from the United States; Ana Hinojosa, Director of Compliance and Facilitation of the World Customs Organization (WCO); Luis Fernando Fuentes, Director of Foreign Trade of the Ministry of Trade, Industry and Tourism of Colombia; Ingrid Diaz, Director of Customs Management of the Directorate of National Taxes and Customs (DIAN) Colombia, Sandra Clavijo; Business & Investor Immigration Attorney, among others.

Alvaro Alpízar, vice-chairman of the Board of Directors of the World BASC Organization, held an important conversation with BASC business leaders on the panel: BASC Philosophy – A safe world for trade is a better world for all, with Juan Carlos Andrade, general manager of Terrafertil from the  Nestle Group in  Ecuador; July De La Cruz, Director of security DP World Caucedo in the Dominican Republic; Arturo Cassinelli, manager of Talma Airport Services S.A. Peru; and Gabriel Echavarria Obregon, member of the board of directors of COMPAS Ports in Cartagena, Colombia.

Left: Conversations of entrepreneurs about BASC Philosophy ¨A safe world for trade is a better world for everyone.¨

The congress featured the signing of a Memorandum of Understanding (MOU) between the Florida Customs Brokers & Forwarders Association (FCBF) and World BASC Organization (WBO). Both organizations enthusiastically committed to cooperate and share information, events and training for the benefit of their members.

Additionally, the Congress also featured the official launch of the of the book “Challenges of Contemporary International Trade” by author Eduardo Moreno, Director of the master’s degree in Strategy and Geopolitics of School of War of the Colombian Military Forces. Mr. Moreno spoke on the pillars of the BASC philosophy and the challenges facing international commerce. A complimentary copy of the book was handed out to all attendees of the congress.

The World BASC Congress closed its second day with the intervention of Allen Gina, former Deputy Commissioner of Trade, United States Customs and Border Protection (CBP) and founder of the firm, CT-Strategies. In his presentation “22 Years of BASC – A Winning Business Strategy competitiveness” Mr. Gina touched on BASC’s objectives and value to members. He also described the evolution of BASC from its beginnings as a business led initiative in Latin America.

Mr. Gina was followed by Mrs. Laura Valdivieso, Deputy Minister of Commerce, Industry and Tourism of Colombia, and Mr. Marco Llinas, Vice-president of Competitiveness and Shared Value at the Bogota Chamber of Commerce, poke on the role and impact of their sectors on the country’s economy.

Miguel Velasquez Olea, Executive Director of BASC Bogota Chapter moderated a panel of senior commanders of the Military Forces and National Police of Colombia who spoke on how these organizations promote national security and create an environment where business can thrive.

Right: Ana Hinojosa, director of Compliance and Facilitation of the World Customs Organization – WCO, during her presentation “Customs and Private Sector” – creating synergies to promote, simplify, facilitate and secure trade.

The keynote speaker on the second day was Mrs. Marta Lucia Ramirez, Vice-President of Colombia, who addressed the audience via a video message, in which she congratulated the BASC organization for 22 years of success and recalled how BASC began, the importance of the organization and its contribution to international trade in Colombia and countries in the region.

Special recognition was bestowed on Mr. Fermin Cuza, President International, for his role in the creation of his dedication and leadership for more than 22 years on behalf of BASC.

The Congress closed with a rousing and festive “carnival”, presented by an internationally renowned folkloric dance group, “The Carnival of Barranquilla”, that has also been recognized by UNESCO as an “Oral and Intangible Heritage of Humanity”.

The day concluded with a visit to the Port of Cartagena (Sociedad Portuaria Regional de Cartagena) where port management graciously hosted a tour of its facilities and operations, attended by more than 140 persons from the Congress.

Left: Panoramic view of the Sociedad Portuaria Regional de Cartagena S.A., Port of Cartagena, where the visit of the congress attendees was developed.

Right: Moments during the closing of the BASC World Congress in the city of Cartagena de Indias, Colombia.