BASC is invited to the first working session of the UNIDIR Mixed Working Group in Geneva. 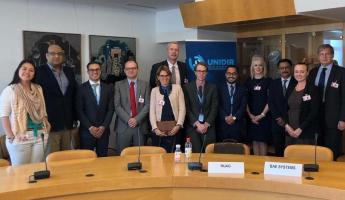 The United Nations Institute for Disarmament Research (UNIDIR), made a special invitation to BASC to participate in the first working session of the Mixed Working Group with representatives from key defense industry and relevant private sector entities and experts, on October 3rd and 4th at the United Nations Palace in Geneva, Switzerland.

The United Nations Institute for Disarmament Research is a voluntarily funded autonomous institute within the United Nations. As an impartial actor, the Institute generates ideas and promotes action on disarmament and security. Since 2015, UNIDIR has been focused on research and development through three phases of work, whereas in the first phase, we find the analysis and control over the use of conventional weapons and the opportunities of harmonization of controls at government levels. The second phase of work, raises awareness and promotes training on best practices. In the third phase, identifies and categorizes the roles and responsibilities of the Private Sector in the use and transfer of weapons and how they can contribute to prevent misuse and deviation.

Within the context of the third phase, BASC was invited to speak at the forum. Alvaro Alpizar, President of WBO, presented the Global BASC Project, as an instrument for strengthening border security in the 21st century while facilitating trade. Global BASC integrates the SAFE framework, the Authorized Economic Operator (AEO) program of the World Customs Organization (WCO), the Trade Facilitation Agreement of the World Trade Organization (WTO).

In his visit to the headquarters of the UNIDR in Geneva, Mr. Alvaro Alpízar, stated that: “Thanks to the relationship between WBO and WCO, and considering the SAFE Framework, BASC has served as a bridge to enable and promote communication between UNIDIR and the WCO, in the spirit of encouraging collaboration within the resources and expectations of both organizations.”

During the work sessions, different topics of great impact were discussed, related to information exchange, documentation, risk management, threat awareness and opportunities for strenthening the integrity of the supply chain. The BASC program and Global BASC platform were well received by UNIDIR and also by representatives of the private sector, which committed to continued joint support and work.

The United Nations Institute for Disarmament Research generates ideas and promotes action on disarmament and security. Based in Geneva, UNIDIR is centrally positioned to assist the international community in developing the practical, innovative thinking needed to find solutions to the challenges of today and tomorrow.

UNIDIR works on the basis of the final document of the first special session of the UN General Assembly devoted to disarmament and also takes into account relevant General Assembly recommendations. The work programme is reviewed annually and is subject to approval by the UN Secretary General’s Advisory Board on disarmament matters, which also functions as UNIDIR’s Board of Trustees.

UNIDIR serves as a bridge among United Nations disarmament, security and development organizations and between the United Nations system and the broader security community to create the necessary synergies to address and mitigate the effects of insecurity at the international, regional and local levels. Therefore, BASC is pleased to contribute and support its experience at the private sector for the analysis of best practices and solutions on this important topic for society and countries around the world.